An ovarian cancer survivor is pregnant with twins after her final cycle of IVF.

The lifesaving chemotherapy treatment which destroyed Tara’s eggs after she was diagnosed with cancer when she was 24 years old, ultimately threatened her hopes of one day having a family.

“I was allergic to the chemotherapy so each round would take 24 hours with a high dose of steroids,” she recalled. 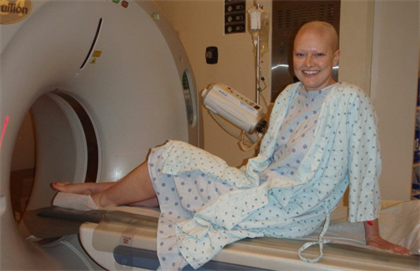 After struggling to conceive naturally for six months with her husband, David (31), they sought fertility treatment.

The registered nurse and her hubby already had one child, Aiden, and although she was grateful for their son, she never gave up her dream of wanting a bigger family.

“I was fortunate enough to have Aiden (19 months) who was conceived via the first round of IVF but when he was eight months old, I desperately wanted another.”

The pair, who met and fell in love while Tara was looking after David’s mother, spent all their savings on fertility treatments.

And despite doctors warning the risk of cancer returning due to the vast amount of hormones in each cycle following their fourth failed treatment, the couple remained faithful.

“We tried IUI [intrauterine insemination] but it failed nine times, I was heartbroken. All I wanted was a baby. My friends were having them and I couldn’t help but feel jealous,” explained Tara.

After four rounds of IVF, nine IUI – which involves placing sperm inside a woman's uterus to facilitate fertilisation – and one miscarriage, she’s finally pregnant with twins.

“I’m now the happiest I’ve ever been as my dream family is soon to be complete.”